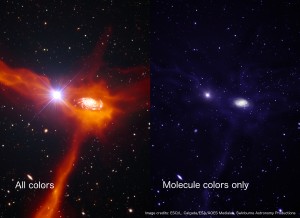 Image: Artist’s impression of the gas surrounding a young galaxy in the distant universe. The gas, shown as red streams on the left, is actually invisible, and the starlight from the galaxy is too faint for astronomers to see directly. Instead, the gas is seen in silhouette against a bright, background quasar. Molecules in the gas imprint a shadow, or absorption line, onto the quasar light at a very specific colour, as seen on the right, and astronomers can detect this shadow.