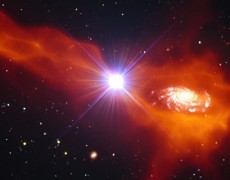 We’ve spotted a distant galaxy feeding on the gas in its surroundings, gathering in the fuel to form new stars.

We know that galaxies quickly deplete their reservoirs of gas as they grow and create new stars, so they must continuously replenish this with fresh gas from intergalactic space to keep the process of star formation going. Our new work is some of the best observational evidence supporting this idea. And the light from this galaxy has been traveling to us on Earth for about 11 billion years, much of the Universe’s 14 billion year history, and, at that time, galaxies were producing huge numbers of stars, more than 10 times the rate of stellar birth in the present-day Universe. Basically, it’s like feeding time for lions at the zoo. This particular galaxy has a voracious appetite, and we have discovered how it feeds itself to grow so quickly.

Check out the media releases about this work from the European Southern Observatory, Swinburne University of Technology, and University of California, Santa Barabara.

For more details, including additional images and videos, see this website.