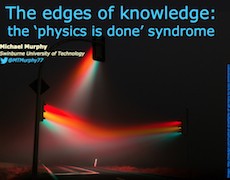 The video capture of the talk and slides can be watched below. Following my talk is a panel question session chaired by Prof. Brian Schmidt AC FAA FRS and including the speakers before me in the same session: Prof. Tamara Davis, Dr Alessandro Fedrizzi, and Dr. Luke Barnes.

Here’s the abstract of my talk:
Over the last century, physicists have established that the Standard Model of particle physics and General Relativity explain all the phenomena we observe in our Universe (with a possible exception or two). To some, it can seem like ‘physics is done’. At the same time, though, physicists repeatedly attempt new observations and experiments, aiming to test—and hopefully break—the predictions of these theories and/or to search for new phenomena altogether. The problem is this: physicists seem convinced that, despite their success, current theories seem incomplete and more than a little unsatisfying. For example, one can ask seemingly well-motivated questions, such as ‘Why does electromagnetism has the strength it has?’, and our current theories have no answers. In this presentation, I will give an observational astronomer’s view on the ‘physics is done’ syndrome and physicists’ attempts to test current theories and find new phenomena. I will try to speculate on the possible edges of knowledge – on what we can and cannot know, in principle – about our Universe.