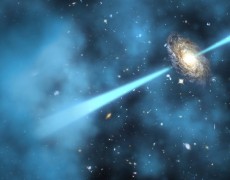 We’ve taken the universe’s temperature! Its rising fever broke about 11 billion years ago.

See the Swinburne Media Release about it here.

In the early universe, most of the atoms were dispersed in between galaxies as wispy, fairly cool gas. But 12 billion years ago, when the universe was 2 billion years old, many extremely bright and powerful quasars were ‘switching on’, ionizing the helium in the (mostly hydrogen) gas of the intergalactic medium. As a result, this gas started to get hotter, giving the universe a nasty fever.

Our colleagues discovered this ‘universal fever’ only recently in 2011. They studied the spectrum of shadows the intergalactic medium casts on background quasar light shining through it on its way to telescopes on Earth.

Animation of the Universe breaking its fever: As the UV light from powerful quasars ionizes the helium in the intergalactic medium, the gas heats up. But when all the helium is ionized, the quasar light can no longer heat the gas; it passes straight through and the gas begins to cool down as the Universe expands.

Now, Swinburne astronomy PhD student, Elisa Boera, myself and two of these colleagues, George Becker at the University of Cambridge and James Bolton at the University of Nottingham, have taken the universe’s temperature when it was just a bit older (a billion years). We collected the bluest light that our atmosphere transmits (the dangerous ultra-violet light that the Earth’s ozone layer partially blocks) from 60 quasars and used the same method as before to find that this universal fever broke around 11 billion years ago. We found evidence that, at that time, the heating trend observed before seems to switch to a cooling trend. We think that cooling trend probably continued all the way to the present day.

What caused this universal fever and why did it break 11 billion years ago? We think the answer is helium. The video above illustrates what we think happened.

Most of the intergalactic gas is hydrogen, but about 14% of it is helium. The helium 12 billion years ago was able to absorb radiation from the quasars, but only by losing electrons – ionizing. Those electrons’ motion caused the gas to heat up. This is similar to the greenhouse effect on Earth: here, CO2 gas absorbs infrared light, causing the atmosphere to heat up. But once all the helium was ionized, the quasar radiation would simply pass through the gas and not cause any more heating. As the universe continued to expand, the gas started cooling down instead, much like the gas from an aerosol can cools as it emerges from the can and expands.