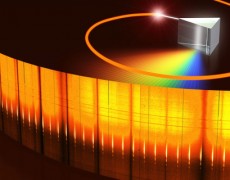 An ‘astrocomb’ is a femtosecond laser frequency comb fired into an astronomical spectrograph. Frequency combs earned their inventors – Ted Hänsch and John Hall – the 2005 Nobel Prize in Physics. The “teeth” of the comb form a regularly-spaced set of sharp lines in the spectrum, all with known, highly-precise frequencies, thereby providing a kind of ‘frequency ruler’ with which to calibrate the spectrograph. Simple, right? Well, maybe in theory, but in practice it’s quite a challenge.

With a team based in Nobel Laureate Ted Hänsch’s group at the Max Planck Institute for Quantum Optics, Menlo Systems, the European Southern Observatory and the Kiepenheuer Institute for Solar Physics, we successfully injected infrared frequency comb light into the VTT solar telescope in Tenerife, on 8 March 2008. We were able to measure the spectrum of the Sun in infrared light to precisions exceeding the previous state-of-the-art, even with just this first astrocomb light.