We’ve used the 3 most powerful optical telescopes on Earth to test a fundamental law of nature 10 billion years ago!

Swinburne University PhD student, Tyler Evans, led this new work to comprehensively compare spectra of a single, distant quasar gathered using three different telescopes – the Very Large Telescope in Chile, the Keck Observatory in Hawaii and the Subaru Telescope, also in Hawaii. Why three telescopes? Because we’re measuring one of nature’s “fundamental constants”, so we want to make absolutely sure we get it right.

See the media releases from Swinburne University of Technology, the Dell’Istituto Nazionale Di Astrofisica (in Italian) and the Universidad do Porto (in Portuguese).

ABC Science (Australia) also reported this work. Listen to my interview on their StarStuff podcast here (it starts about 17m30s into the podcast).

Here’s an info-graphic explaining our experiment (larger versions are available in the gallery below): 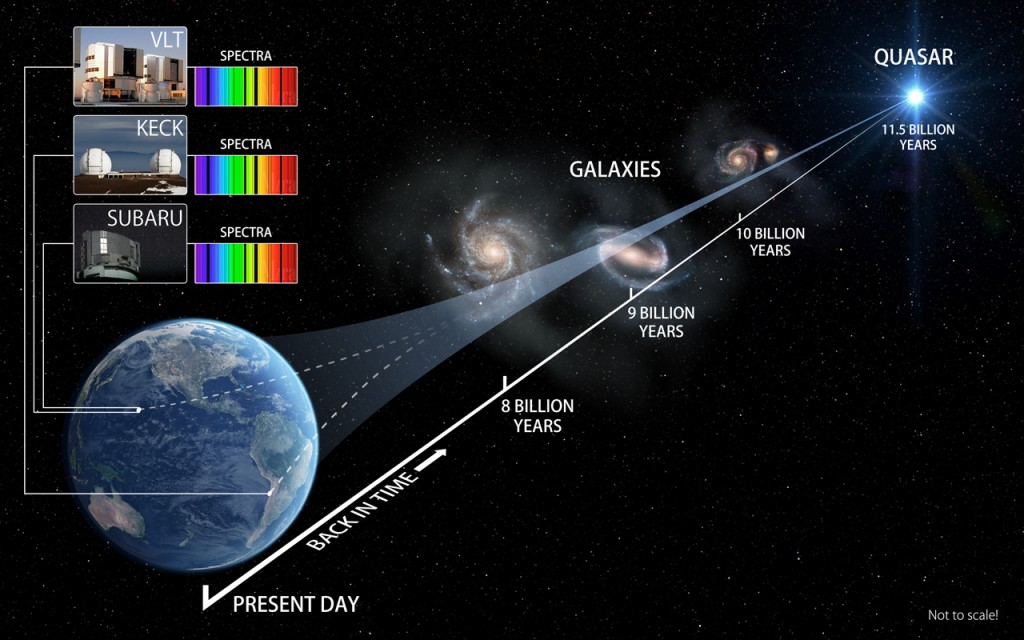 We targetted the quasar – a supermassive black hole whose surroundings glow hundreds of times brighter than a galaxy – because we knew (from previous observations) it had 3 galaxies along the line of sight from Earth. We took a spectrum of the quasar with the 3 telescopes, spreading the light our into its colours, to reveal the characteristic signatures of gas in these galaxies: some very specific colours are absorbed out of the light beam. This pattern of dark lines (missing colours) in the spectrum is like a barcode: it encodes the value called the “fine structure constant” – effectively, the strength of electromagnetism – in the galaxies. All we have to do is read this barcode (using some fancy techniques) to measure this fundamental quantity in the distant universe!

By getting three copies of the spectrum, we can check to make sure the barcode we’re reading really is correct. If the specialised prisms on the telescopes that separate the light into its component colours somehow distort the barcodes a bit, then we won’t measure the correct strength of electromagnetism. That is, if some of the dark lines are shifted around, even by a few parts in a million, we’re able to detect it by cross-checking the spectra (rainbows) from the 3 different telescopes.

Actually, we did find some small distortions like this, but we’re able to correct for them. Once corrected, our measurements of electromagnetism in all 3 galaxies, on all 3 telescopes, agree with the strength found here on Earth.

All this triple checking means that our new measurement is probably the most reliable one ever made of electromagnetism outside our Milky Way galaxy. 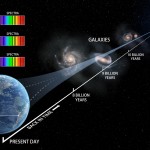 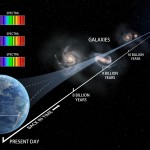 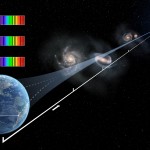